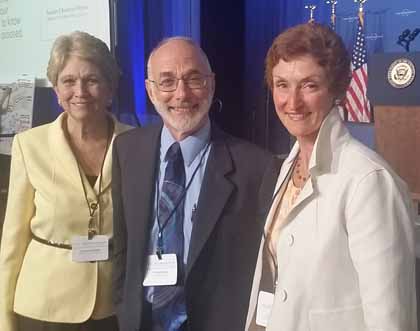 The Cancer Moonshot hosted a summit on 29 June at Howard University in Washington, D.C., as part of a national day of action that also includes more than 270 events in communities across the United States.

Vice President Joe Biden joined over 350 researchers, oncologists and other care providers, data and technology experts, patients, families, and patient advocates, among others at Howard. They were joined by more than 6,000 individuals at events in all 50 states, Washington, D.C., Puerto Rico, and Guam. This is the first time a group this expansive and diverse has met under a government charge  to double the rate of progress in our understanding, prevention, diagnosis, treatment, and care of cancer.

Biden announced a set of new public- and private-sector actions to drive progress toward ending cancer as we know it. Federal agencies have come together as part of the Cancer Moonshot Task Force and are announcing additional investments, improved policies, and new private sector partnerships focused on catalyzing new scientific breakthroughs, unleashing the power of data, accelerating bringing new therapies to patients, strengthening prevention and diagnosis, and improving patient access and care.

Additionally, in response to the Vice President's call to action, the private, philanthropic, and academic sectors, along with the patient advocacy community, have stepped up with new collaborations and actions aligned with the goals of the Cancer Moonshot.

Among them, the NPI will coordinate new, high-level public and private collaborations to develop a cancer technology roadmap that identifies the most promising existing and new technologies for increased and concerted private and public investment that will accelerate the early detection of cancer, saving lives and improving the quality of health care within the next five years.

The NPI is bringing together the scientific community, leading medical technology industry, over 350 hospitals and major patient advocacy groups across the nation to leverage the more than $3 billion annual private investments in cancer research toward early detection technologies of the most aggressive cancers.

The NPI white paper and cancer technology roadmap unveiled at the summit, "A Brighter Future: Achieving the Goals of the Cancer Moonshot through Adoption of New and Enhanced Technologies and a Transformed IT Health System," details the commitment of the photonics-led consortium.

"Curing cancer will not happen overnight; it will take public-private partnerships and coordinated investments that will accelerate the prevention, diagnosis and treatment of the disease," said Tom Baer, chair of NPI Cancer Moonshot Task Force who attended the Cancer Moonshot Summit in Washington.

"Like too many Americans, the Vice President's fight to end cancer is personal. The photonics community and our partners in health care, industry and academia stand united in admiration and support of his mission to bring about a decade's worth of advances in five years."

The NPI Cancer Moonshot Task Force hosted a webinar on 30 June to discuss the roadmap and ways to achieve the goals of the Cancer MoonShot through adoption of new and enhanced technologies and a transformed IT health system.