The World Cup in 3D!

World Cup audiences this year will be the first to experience a soccer match in real-time 3D without actually having to buy a ticket to the game.

The Federation International Football Association (FIFA) signed a media rights agreement with Sony earlier this year to deliver 3D broadcasts of up to 25 of the 64 matches of the 2010 FIFA World Cup South Africa, which run from 11 June until 11 July. FIFA, Sony and its service provider production partners (HBS, Telegenic and AMP Visual TV) cannot film more than 25 games because of logistics of moving production facilities across South Africa.

Several sports broadcast television stations have also announced they will be showing the matches in 3D. Both Australian broadcasters SBS and the Nine Network plan to broadcast some of the World Cup games in 3D. Australians have already had the opportunity to see a "friendly" match between New Zealand and Australia in 3D on May 24, when Fox Sports broadcast the match, the first TV event to be broadcast in 3D in Australia. British broadcaster Sky launched a Sky 3D channel in April 2010, with a football match of Manchester United vs. Chelsea.

The American sports broadcaster ESPN has announced that it will use the starting game of the World Cup between South Africa and Mexico to unveil the first dedicated 3D television network in the United States. ESPN is promising to broadcast at least 85 live sporting events to its new 3D channel in the first year, starting with the 25 World Cup games and then moving to professional basketball, college basketball and football, as well as the annual X-Games competition.

For broadcasters who are showing the games in 3D, Pictometry has created 3D imagery and real 3D models of World Cup stadiums, and are available to international media outlets for use with either their 2D or 3D broadcast. Pictometry Real 3D allows broadcasters, or any user, to simulate zooming in on a stadium from space, so viewers can fly in and around a location, and provide a real-time experience.

Sony is expecting a live worldwide audience of a few hundred thousand per match during the World Cup, even with the limited number of consumers with 3D-enabled television sets. 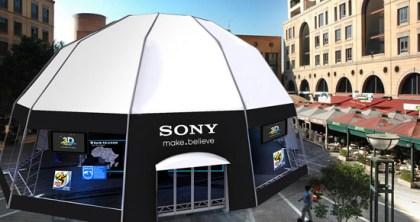 Sony has set up 3D pavilions in seven countries that will display the World Cup matches in 3D. (Credit:Sony).

Anyone who wants to watch the games at home, however, will have to invest in new 3D televisions, rather than a converter box like when switching from analogue to digital broadcasting. These TVs typically cost more than $2,000, at least for now. Viewers will also have to use large 3D goggles, which filter two sets of synchronized footage separately to the left and right eye thus creating the three-dimensional effect. Autostereoscopic televisions, which do not require glasses, are unfortunately still in their infancy. Nonetheless, technology companies like Sony, Panasonic and Samsung are rushing to put out 3D TV models in time for the World Cup, or for Christmas.

In the meantime, there are other options to watch the games in 3D, at least in some countries. Multiplex cinemas will broadcast South Korea's World Cup matches live in 3D to lure fans away from their televisions at home.

"People don't come to theatres when there's a Korean match," CGV marketing official Park Hye-Young told South Korean Yonhap News. "So we decided to show the matches on our screens that are best for watching sporting events."

The matches will also be available live in 3D in a selection of cinemas and public-viewing locations around the world. Sony will open a variety of pavilions in seven countries, including South Africa and the UK, where audiences will be able to watch the game.

For a list of the games scheduled to be broadcast in 3D, visit http://www.livesoccertv.com/news/929/2010-world-cup-in-3d-match-list/

As well as 3D imaging of stadiums, remote sensing is also important for stadium security. Read the 2007 SPIE Newsroom article about how different technologies are keeping match goers safe.