Keeping an eye on the ball

Optical technology will make history at the 2014 FIFA World Cup.

The new goal-line technology (GLT) being used at the FIFA (Fédération Internationale de Football Association) World CupTM in Brazil is expected to bring sociological as well as technical changes to the "Beautiful Game."

For nearly 50 years, this particular question has been hotly debated by soccer fans and players: In the 1966 World Cup final between England and West Germany, did Geoff Hurst's decisive goal for England really cross the white line after the ball bounced off the crossbar? England went on the win the match 4 - 2. The Germans dubbed Hurst's goal the "Wembley goal" -- a term used since to describe any questionable decision on a goal.

This incident and several like it have led to arguing being part of the global game. For decades, final decisions by referees have led to bad blood between teams, coaches, sportscasters, and especially fans.

GoalControl-4D, a GLT system from Germany, brings optical technology to the soccer field, with the goal of eliminating some, if not all, of the controversial decisions on goals and decades-long arguments, which seem to come with the territory. 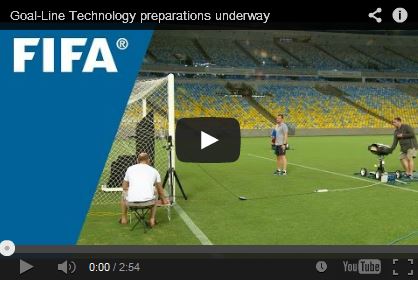 "Wembley reloaded"
As for many of the teams appearing in Brazil, getting GLT to the World Cup games was an uphill battle. Despite debated calls such as the one at the 1966 World Cup final, FIFA and other soccer organizations had a hard time accepting the idea of GLT. It was generally seen as a more of a hindrance than a help; something that would interfere with the action and flow of the game.

A breaking point came during the 2010 FIFA World Cup in South Africa. In a match between Germany and England, a disallowed goal by England's Frank Lampard caused an uproar among fans and players. The goal would have tied the score at 2 - 2, but Germany eventually won the game 4 - 1. Lampard's non-goal was considered "revenge for Wembley."

"Lampard's kick was spotted by the entire world, but not the match officials," said FIFA president Sepp Blatter after the event. "Everyone saw it on the screen but the result was not changed. I wouldn't be again in a World Cup and witness another situation like that."

On 19 June 2012, a similar incident occurred during a Union of European Football Associations match between England and Ukraine. A goal by Ukraine was missed by a referee and his assistant, giving England a 1-0 victory.

Leaving tournament-winning decisions, and national pride, open to human error was no longer acceptable. Blatter stated that GLT was "no longer an alternative but a necessity."

On 5 July 2013, the International Football Association Board (IFAB), the rule-making body of FIFA, made the historic decision to approve the use of GLT in soccer. 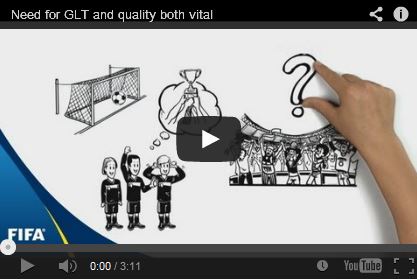 The goal in sight
Several companies touting GLT came forward and nine were eventually chosen for rigorous testing cycles. Some of the more unusual ideas submitted included putting stickers on the ball or using laser beams on the goal line.

With requirements and technology specifications set up by IFAB, the Swiss Federal Laboratories for Materials Science and Technology (EMPA) tested the technologies over several months in 2011 and 2012. Tests included firing a ball from a ball-shooting machine into a wall similar to a goalkeeper in shape and size. This "wall" started out in front of the goal line and would move backwards in increments, until it was eventually behind the goal line. Each GLT system had to accurately determine if the ball had crossed the line.

Two systems ultimately came out on top, Hawk-Eye from the UK and GoalRef from Germany. GoalRef, developed by the Fraunhofer Institute for Integrated Circuits IIS, uses a radio-based system to generate a low-frequency magnetic field around the goal area. Thin coils embedded in the ball allow the ball to be precisely tracked. When the ball passes the goal line completely, an encrypted signal appears immediately on a referee's modified wristwatch. The Hawk-Eye system also sends a signal to referees on a specially adapted wristwatch via 14 cameras set up around the pitch instead of a magnetic field. The software uses "triangulation" to pinpoint the exact location of the ball at all times.

Goal-Ref had high hopes of being selected by FIFA, since its system was already being used in tennis and cricket matches and by the English Football Association, the first national association to use GLT. But in a seemingly last minute decision, the little-known company, GoalControl of Germany, was chosen by FIFA, fueling yet another argument among soccer fans, citing issues such as cost efficiency and reliability -- not to mention national pride.

According to FIFA, GoalControl was chosen based on "criteria relating more specifically to the tournaments in Brazil, including the company's ability to adapt to local conditions and the compatibility of each GLT system in relation to FIFA match operations." 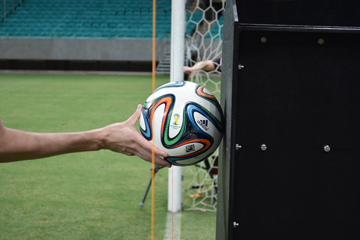 The GoalControl system was thoroughly tested before installation in Brazil.
-- Courtesy of FIFA

What's the frequency?
Similar to the Hawk-Eye system, the GoalControl system uses 14 high-speed cameras set up around the pitch, with seven focusing on each goalmouth. The ball's position is continuously and automatically captured in 3D by an image-processing system that filters out players, referees, and other moving objects, so as to focus on the ball. The ball's three-dimensional x-, y- and z-position is precisely determined and recorded so all goals or near-goals can be reviewed. After a goal, a signal is sent immediately to each referee's modified wristwatch, which vibrates and flashes the word "GOAL" on the watch face.

The main difference between the two technologies, according to Dirk Broichhausen, managing director of GoalControl GmbH, is the frequency band being used. "We are not using the Wi-Fi/LAN frequency band of 2.4GHz," Broichhausen told EE Times. "The transmission code of the sender is extremely secure and has a frequently changing encrypted code." Speaking for GLT in general, Broichhausen adds that the World Cup is the biggest chance to showcase GLT in soccer as it will "put goal-line technology worldwide in the center of interest."

Even with the use of GLT, all final decisions will still be up to the referees. If the system notes that a goal has been scored, the referee can, and is required to, overrule if he spots any prior, separate violation by a player. And no matter how sophisticated GLT becomes, it will never be able to rule on the intention of players called for handball incidents, bad tackles, or plain bad sportsmanship. Soccer fans should still have plenty to argue about decades after the game is over.