Diffractive optical elements are especially useful in parts of the electromagnetic spectrum, such as the soft x-ray region, where suitable materials for reflective and refractive structures are not available. This region is rich in elemental- and chemical-specific absorption edges, making it important in sensitive analytical instrumentation and microscopy. While Fresnel zone plates are not new—they were first described in 18751 and proposed for x-ray applications in 19612—recent nanofabrication technology has allowed for rapid progress in achievable resolution. High-resolution applications are limited by diffraction to approximately the smallest half-pitch of the outer zones, provided that the placement errors are small compared to the outer zone width.

Electron-beam lithography, in which a finely focused beam of electrons is used to expose a desired pattern in an electron-sensitive resist material, is the exposure technique of choice for high-resolution diffractive optics. However, e-beam lithography is ultimately limited by electron scattering interactions in the resist. As the electrons pass through the areas that they are meant to expose, they scatter into adjacent regions that they are not. As a result, dense features are more difficult to produce than sparse features, since the cross scattering from near-by lines degrades the contrast between exposed to unexposed areas. Unfortunately, efficient diffractive lens elements require dense, not sparse, lines. 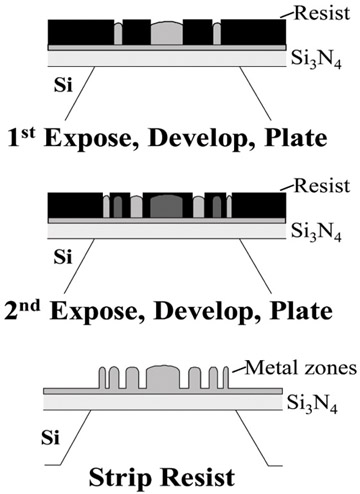 Figure 1. The process flow for double-exposure patterning of dense high-resolution diffractive optics requires exposing and processing the element more than once.

A dense pattern can be considered the union of two or more sparse patterns. The electron scattering can be reduced by using multiple exposures. Of course, each exposure has to be precisely aligned to the previous one and the pattern transfer process must not interfere with the lithography. For diffractive zone plates, the overlay requirement is unforgiving, since the total error of each line must be a small fraction of the smallest zone width. In order to meet this difficult requirement, we tuned up our e-beam system to achieve rock-solid stable performance and employed sophisticated mathematical image-processing techniques to improve calibration and overlay. The alignment uses cross-correlation image processing of expected and measured mark locations in two dimensions to accurately find the offset. Cross correlation is a powerful technique that finds widespread use in many areas of engineering such as wireless communications and global positioning. Cross correlation, by itself, did not achieve the required sub-pixel accuracy but with a few additional computation steps for interpolation, the algorithms produced sufficient sub-pixel accuracy.3

Starting with a thin (100µm-thick) wafer, we fabricated 100nm thick Si3N4 windows using optical lithography and anisotropic etching with KOH. Two sets of alignment marks were then exposed using e-beam lithography, and electroplated. The wafer was cleaned and new resist was spun. The advanced algorithms precisely aligned the e-beam exposure to the first set of marks, then a pattern consisting of every other zone was exposed. The sample was electroplated, cleaned, and re-spun with resist. Next a different pattern consisting of the remaining zones was exposed, developed, and electroplated.

Figure 1 shows the process flow. The final result is shown in Figure 2, where the outer lines have a half pitch of only 15nm.4 Figure 3 shows an x-ray micrograph of a 30nm period (15nm Cr, 15nm Si) test sample taken at the Center for X-Ray Optics' full-field imaging microscope XM1 at the Advanced Light Source Synchrotron. The lines and spaces are well resolved, which had never been accomplished with zone plates made to date using single-exposure techniques. 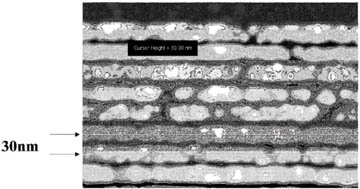 Figure 2. This scanning electron micrograph shows the 15nm half-pitch zone plate after the final cleaning step. The realignment process is sufficiently accurate to produce errors of only a few nanometers. 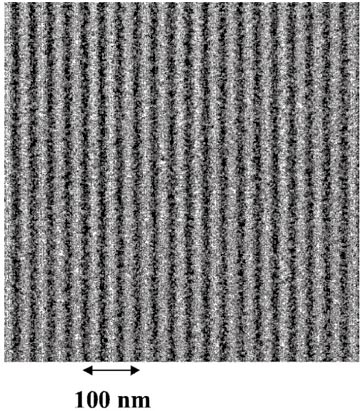 Figure 3. This shows an x-ray micrograph of a test object consisting of 15nm Si and 15nm Cr taken at the full-field x-ray microscope, XM1 at the Advanced Light Source Synchrotron demonstrating better than 15nm resolution.

Double exposure with accurate realignment is a very general and powerful technique to move beyond limits posed by single exposure. For example, it can be used to increase the aspect ratio of a structure. Additionally, some stepwise structuring can improve the efficiency of a diffractive optical element. There are opportunities to go beyond 15nm in resolution, improve efficiency, and extend the useful energy range of these diffractive structures for focusing and imaging applications.

This work was supported by the US Department of Energy under Contract No. DE-AC02-05CH11231 and the Department of Defense, DARPA Advanced Lithography Program. We acknowledge the help of Bruce Harteneck, J.A. Liddle, Peter Fischer and David Attwood.
Erik Anderson
LBL Center for X-Ray Optics,
Lawrence Berkeley National Laboratory
Berkeley, CA

Erik H. Anderson joined the Center for X-Ray Optics (CXRO) in 1989. Starting in 1994, he led a team to develop a specialized electron-beam lithography tool, optimized for diffractive optics, which is critical for fabricating nanostructures for numerous soft x-ray and EUV applications. He is currently the head of nanofabrication and diffractive optics at CXRO.