Increasing the resolving power of optical systems beyond the limits imposed by diffraction, or super-resolution, has been generating significant interest for microfabrication applications.1,2 In this context, two-photon polymerization has recently emerged as an attractive technology for creating 3D microdevices, because two-photon excitation provides a means for activating chemical or physical processes with high spatial resolution in three dimensions.2,3 The method is based on irradiating a gel containing monomers and a photoinitiator with a laser that traces the 3D profile of the desired micro-object. Besides its submicron resolution, the technique also has great potential for microstructural applications, photonic crystals and micro electro-mechanical system research.3–6

The two-photon absorption probability depends quadratically on laser intensity, with the result that, under tight-focusing conditions, the absorption is confined at the focus of a very small volume along with the subsequent photochemical reactions that induce polymerization and 3D microfabrication. The efficiency of the process depends on the two-photon absorptivity of the photoinitiators. However, most typically have low two-photon cross-sections, which makes them poor photopolymerization initiators.2,3 Since there is a direct relationship between the degree of achieved polymerization and the lateral spatial resolution of two-photon polymerization,7 this effectively introduces a limitation in the 3D resolution of most two-photon microfabrication systems. 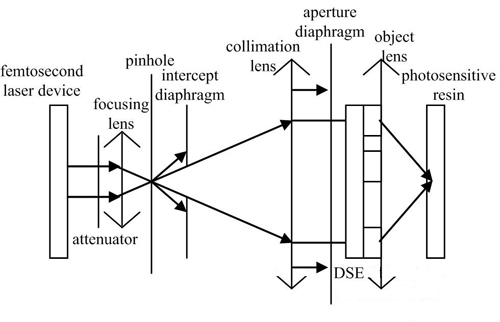 Efforts at improving resolution are presently focused on the design of laser systems and photopolymerizable resins that enhance spatial resolution.8,9 An attractive solution is to use the novel optical diffractive super-resolution element (DSE) developed by H. Liu at Tsinghua University.10 The design seeks to reorganize the optical intensity distribution of a laser in three dimensions. An advantage is that it can be fabricated using simple binary optics technology. Figure 1 shows the schematics of a two-photon microfabrication system incorporating a 3D DSE. The beam from a femtosecond laser device is passed through a power attenuator, a pinhole filter and a collimator lens, from which it emerges as a plane wave. The plane wave passes the DSE and an object lens and is finally focused on a photosensitive resin, which produces a radical photopolymer by simultaneous absorption of two photons. This feature is particularly advantageous because the concentration of the photoproduct is proportional to the intensity of the laser. Since the polymerization process only occurs if its concentration reaches a given critical value, it can be tuned to achieve 3D super-resolution. 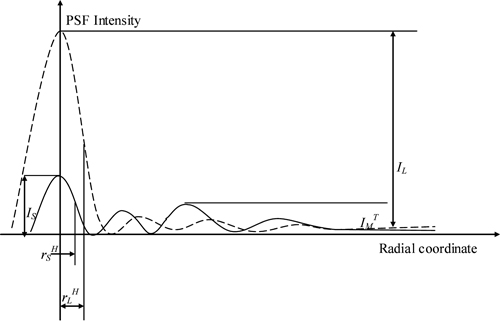 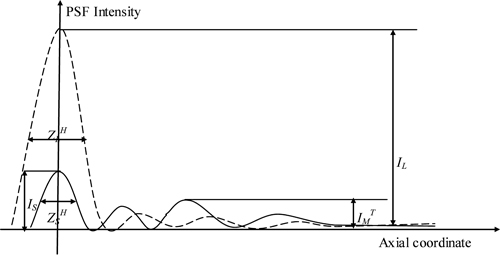 (b)
Figure 2. Performances of radial (a) and axial (b) coordinates. PSF: point spread function.6

Two-photon microfabrication technology incorporating the novel DSE indeed seems a very promising way to fabricate the types of 3D microstructures required for next-generation optical devices. Our simulation results have also shown that we can easily use available technology (such as binary optics) to fabricate structures on a suitable scale (300–500nm) and robust enough for incorporation into real devices. Our next step will be to show that the new DSE can also prove useful for the fabrication of 3D micro-optical products.

Wei Peng obtained a BS in Automation Control from Shandong University in 1997 and a PhD in Electromechanics from Beijing University of Aeronautics and Astronautics in 2004. From 2004 to 2005, he conducted postdoctoral research at Tsinghua University, Beijing.