Techniques to identify rotated faces and irises result in high overall detection rates and real-time processing.
03 April 2007
Claudio Perez
Face detection and eye gaze estimation are crucial components of applications such as virtual reality, video conferencing, video surveillance, face recognition and face database management.1-4 New applications involving human-machine interfaces are under development where eye gaze could be employed to control machines assisting handicapped individuals, or in technologically complex environments such as hospital operating rooms, airplane cockpits, or industrial control units.1,5-7
Several limitations have been identified in existing face and iris detection methods: some are invasive; some focus on only one eye, do not follow head movements, or only follow very small head movements; some fail to detect eyes while blinking; and some require manual initialization. Additionally, some impose restrictions such as symmetry, which limits the background content. Other methods depend on face skin tone, which varies among different ethnic groups and is dependent upon nearby light sources. These limitations contribute to two particular problems that apply to most methods of face and eye detection: they cannot work in real time, and they are not robust for face rotations.1,8-12
To allow real-time processing, our first approach was to use anthropometric templates for face and eye detection. This set of templates, which consists of different face sizes, includes key facial features such as eyebrows, nose, mouth, and the lower part of the chin, thus mainly limiting the search to these specific face and eye characteristics. For eye detection, the templates consider an eye region within an elliptical face contour.
Our second approach was to design templates using PSO (particle swarm optimization) to search for the best templates,8 or use a local component maximization (CM) procedure.9 The problem of face rotations is addressed by building a set of templates for different face rotation angles.10
Face detection in digital images employing templates has been approached in several previous studies.10,13-15 In these studies, face detection is performed using two stages: coarse and then fine face detection. In the first stage, the possible face center is determined using elliptical templates based on a Hough transform over a coarse directional image.10,13 The highest value in the accumulator is taken as the possible face center, and fine face detection is then performed in a region around the coarse face center. For this purpose a set of face templates are used to compute a line integral of each template over the directional image.10,13-15 Figure 1(a) illustrates coarse face detection, and Figure 1(b) shows the fine face detection stage. 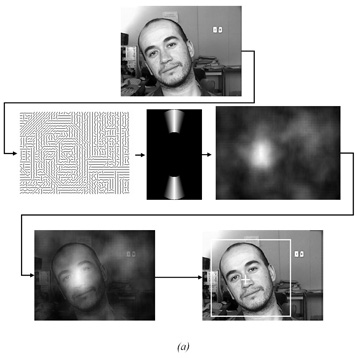 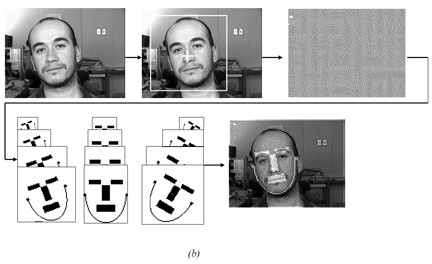 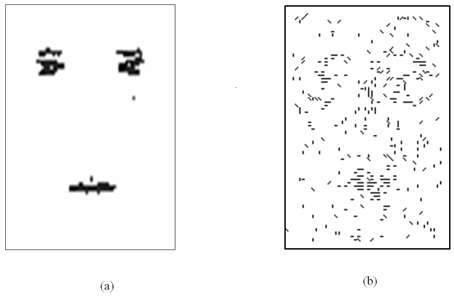