The potential use of organic materials for photovoltaic devices has been investigated intensely over the past few decades. In particular, the recent discovery of conjugated polymers that show semiconductor-like behavior has stirred excitement. Such materials are not only able to function in a similar way to inorganic semiconductors but also have important advantages. These include their being low cost, light weight, easy to fabricate, and potentially manufacturable as large-area coatings. The use of such polymers as photoactive electrodes is of increasing interest as the processing possibilities of these materials become more developed. Furthermore, the high absorption coefficients of these materials and the possibility of varying the band gap through molecular engineering have opened up new options for solar-energy conversion.

Earlier studies of the photoelectrochemistry of conducting polymers mainly focused on their use as protective films against photocorrosion and as photoactive electrodes in liquid-junction photoelectrochemical cells (PECs). Photocorrosion and side reactions involving the electrolyte solution, as well as packaging difficulties, limit the working life of liquid-electrolyte PECs. Solid-state PECs, which use solid-polymer electrolytes, provide a means to eliminate this problem. This is because they can easily be processed into thin films over large areas and are easier to encapsulate. Solvent-free ion-conducting polymer electrolytes eliminate the handling, portability, and packaging problems encountered in liquid-junction PECs. Furthermore, the photoelectrochemical properties occurring in these systems are basically the same as those occurring in systems based on semiconductor photoelectrodes in contact with liquid electrolytes. 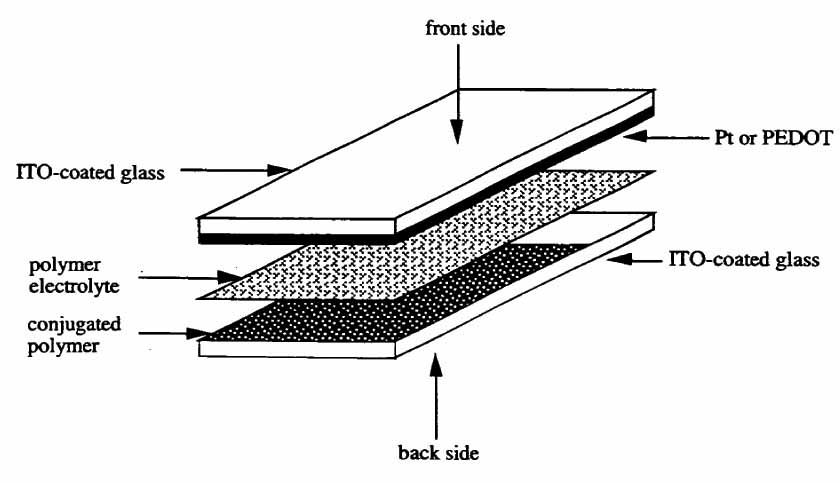 Figure 1. Solid-state PECs basically consist of a conjugated polymer on indium doped tin oxide (ITO)-coated glass; a polymer electrolyte complexed with a redox couple; and platinum or oxidized poly(3,4-ethylenedioxythiophene) on ITO-coated glass as a counter electrode.

Our group studies solid-state photoelectrochemical solar-energy conversion devices using standard photoelectrochemical and photoelectrical characterization techniques. The basic structure of these solid-state PECs is shown in Figure 1. They all contain an electrically-conducting conjugated polymer, an ionically-conducting polymer electrolyte complexed with a redox couple, and a counter electrode. 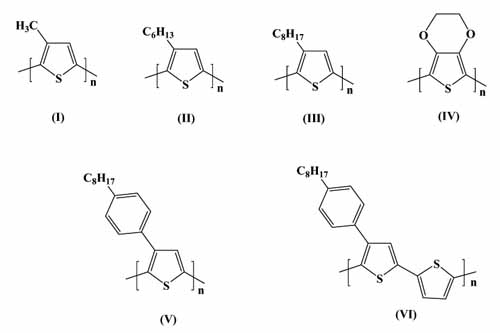 The chemical structures of the conjugated polymers used in the construction of the solid-state PECs we have studied are shown in Figure 2. Each of these polymers were coated on glass that has also been coated with indium-doped tin oxide (ITO), which provides electrical contact and acts as a current collector to transport the charged particles generated.

In some systems, platinum, deposited by vacuum evaporation onto ITO-coated glass, was used as the counter electrode. In others we used oxidized poly(3,4-ethylenedioxythiophene) that has been coated electrochemically onto the ITO. Platinum or oxidized poly(3,4-ethylenedioxythiophene) are required on the ITO coating of the counter electrode because they improve charge transfer between ITO and the iodide/triiodide redox couple. It is known that bare ITO is irreversible for the iodide/triiodide oxidation/reduction reaction.1

Table 1 summarizes the short-circuit current (ISC) and open-circuit potential (VOC) of the various solid-state PECs studied. The values of the ISC and VOC are smaller than those for liquid-electrolyte-based dye-sensitized nano-crystalline titanium dioxide PECs. However, the results are still encouraging when the advantages of polymer electrolytes over liquid-electrolyte-based PECs are considered.

Studies of these devices showed that solid-state organic photoelectrochemical conversion provides a good alternative for solar energy. The optical absorption of conjugated polymers in the visible region of the electromagnetic spectrum was high. However, the poor charge transport across the materials and the collection at the contacts kept the conversion efficiencies low. Better understanding of these systems is needed to increase the efficiency. In particular, further work is required to study the mechanism of junction formation and the dependence of photoactivity on molecular structure and device composition. The sequence of events for carrier photogeneration, i.e., photon absorption, exciton generation, diffusion, recombination, and exciton dissociation, must also be better understood.

Our future plan is to construct and study hybrid organic/inorganic PECs. Dye-sensitized PECs on highly porous nano-crystalline titanium dioxide electrodes give power conversion efficiencies of nearly 11%. In organic/inorganic hybrid solar cells there is a possibility of combining the low-cost thin-film fabrication and the high efficiency in transporting holes of conjugated polymers with the good electrical and optical properties of inorganic materials.

Dr. Teketel Yohannes is a staff member of the Chemistry Department of the Addis Ababa University. He leads the research group working on organic solar-energy conversion. He has worked as a visiting researcher at the Laboratory of Applied Physics, Linkopings University, Linkopings, Sweden; the Linz Institute of Organic Solar Cell, Johannes Kepler University, Linz, Austria, and at the Experimental Condensed Matter Physics, Department of Physics, University of Antwerp, Antwerp, Belgium.