Revolutions in telescope technology have consistently driven the next generation of astronomical discoveries. Over the last century the development of the 1.5- and 2.5m telescopes at Mount Wilson Observatory, the 5m at Palomar Observatory, and so on through to the 10m Keck telescopes, have led to new discoveries based on the increase in telescope aperture. The Hubble Space Telescope, while not having the largest aperture, continues to be at the forefront of discovery because of its use of space technologies. Still, these telescopes all have something in common: they are made from steel and glass.

The next revolution in telescope technology is being driven by changes in the materials that make up the telescope and optics. Telescopes now being constructed for use at the Navy Optical Prototype Interferometer1 (NPOI) are being made entirely from carbon fiber-reinforced polymer (CFRP). These CFRP telescopes are remarkably rigid and have excellent optical figure. As well, adaptive optics can enhance the performance of these telescopes.2 Composite telescopes with adaptive optic correction will play a key role in increasing the performance of the NPOI instrument and fulfilling its mission.

Traditional mirror fabrication techniques require long periods of controlled grinding and polishing, and a typical meter-class mirror can take several months to complete. Building telescopes and their optics from composite materials significantly reduces construction time. The composite optics are constructed using glass mandrels that, once fabricated, can be used to reproduce a large number of telescope mirrors. A major advantage of this technique is that the high-quality mandrel eliminates the need for optical polishing of the surface, so once the mirror is formed from CFRP, it is ready for coating.

The optical tube assembly for the NPOI telescope is also manufactured from CFRP, providing both low weight and excellent structural rigidity. The result is a 1.4m aperture telescope that weighs a fraction of what a similar telescope of steel and glass would weigh. As a result, the telescope can be accurately moved and positioned using mounts that are also much lighter and often much less expensive. This increases the opportunity to use larger-aperture telescopes for a given project.

An exploded view of the CFRP telescope is shown in Figure 1. The NPOI telescope is a classical Cassegrain design with the primary and secondary optics and the optical tube assembly constructed from CFRP. 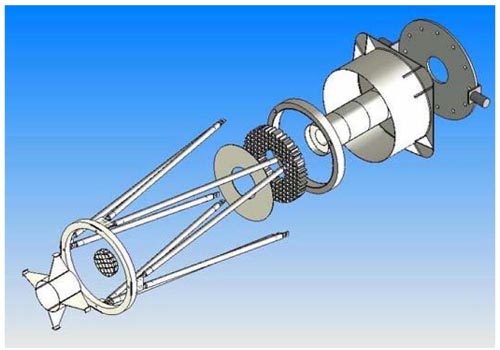 Figure 1. This exploded view of the CFRP telescope shows the position of the composite optics. CFRP: Carbon fiber-reinforced polymer.


CFRP mirrors are fabricated, as shown in Figure 2, by optical surface transfer using a mandrel polished to the optical prescription of the mirror, but with a negative curve. CFRP material is then laid-up over the mandrel in a quasi-isotropic orientation, yielding a mirror with uniform, in-plane mechanical properties. The mirror structure is attached to the back of the mirror face sheet. After curing, the mirror is released from the mandrel and ready for optical coating. The completed NPOI telescope is shown in Figure 3.

Figure 2. The CFRP fabrication sequence appears from left to right: processing the glass mandrel; lay-up of CFRP over the glass mandrel; and release CFRP mirror from the mandrel, ready for coating without additional figuring or polishing.

Figure 3. The 40cm, all-CFRP composite telescope weighs 10kg complete with optics (left). The telescope installed on its mount is shown on the right.


Active and adaptive optics are used on telescopes to remove the effects of atmospheric turbulence, called seeing, as well as to track errors and aberrations in the optical system. Active optical systems are usually integrated into the telescope itself as there are few components,3 whereas adaptive optics systems are often constructed on large optical benches.4 For most large telescopes this poses little problem. A lightweight, portable telescope, however, requires a lightweight and portable adaptive optics system. That means minimizing the size and number of optics, and greatly compacting the optical bench.

The adaptive optics system developed for the NPOI telescopes both mounts on a small optics table and uses a minimum number of components. A key innovation is the adaptive tilt mirror, which combines a lightweight MEMS (microelectromechanical systems) deformable mirror on a standard tip-tilt platform and a pair of off-axis parabolas, mounted in a single fixture that is used to shorten the beam path and provide collimation.5 As a result, many of the reimaging optics have been eliminated from the system.

A lightweight telescope system coupled with adaptive optics has many uses in astronomical systems, but is also suitable for many more diverse applications. A few possibilities include optical communications, remote sensing and surveillance, and mobile platform imagers for land and sea. The authors would like to thank Jonathan Andrews, Christopher Wilcox, and Ty Martinez of the Naval Research Laboratory for their help in preparing this article. 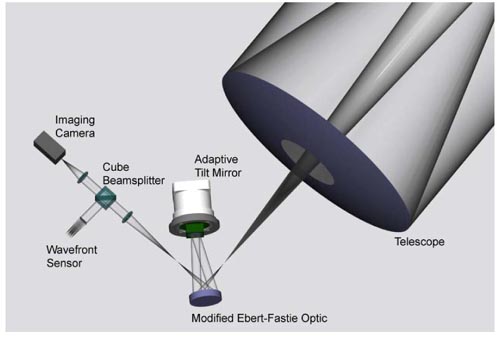 Scott W. Teare is an associate professor and chairman of the Electrical Engineering Department at New Mexico Tech. His research is in the area of experimental adaptive optics and novel imaging systems. He has authored more than 70 scientific and engineering publications. He is a member of several professional organizations, including SPIE.

Sergio R. Restaino is head of the Wavefront Sensing and Control Section of the Remote Sensing Division at the Naval Research Laboratory in Albuquerque. His research focuses on high-resolution imaging problems involving adaptive optics, image stabilization, and long baseline optical interferometry. He has published more than 120 papers, edited or co-edited five proceedings of international conferences, and served as a featured speaker at international meetings. He is a member of several professional organizations, including SPIE.