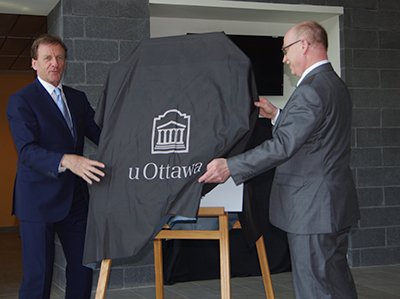 University president Allan Rock and Max Planck Society president Martin Stratmann prepare to unveil the plaque at the dedication of the Centre for Extreme and Quantum Photonics in Ottawa. (SPIE photos)

The official plaque for the Max Planck-University of Ottawa Centre for Extreme and Quantum Photonics was dedicated yesterday in Ottawa. The center, which was created in partnership with Germany's Max Planck Society, is the third Max Planck center in North America.

Martin Stratmann, President of the Max Planck Society, delivered a keynote address during the ceremony. Stratmann said he was "deeply impressed to see how the whole region of Ottawa has turned into a hub for photonics research." He said the Max Planck Society considers its centers "a key element of our international approach," and "flagships in their respective fields. They go beyond scientific collaboration. They should be a platform on which the best students can build their scientific careers."

Stratmann talked about the importance of bringing together experts and younger students with fresh perspectives of their own.

"Scientific excellence differs from expertise," he said. "The advancement of science requires connecting both ends of the line: the skilled and the unskilled, the expert and the newbie. If both are excellent, you can really push the boundaries of science." He added that the growing importance of photonics makes it an attractive field for young people to pursue.

"Having seen the labs today and knowing what's going on, if I were the age of some of you, it would be a field I would be highly interested in," he said.

SPIE CEO Eugene Arthurs attended the ceremony to congratulate the partners on behalf of SPIE.

The German ambassador to Canada, Werner Wnendt, also spoke at the dedication ceremony and praised the long-standing scientific collaboration between Canada and Germany.

"This shared commitment will help us to further develop and intensify Canadian-German S&T collaboration," Wnendt said. "I think there is still much more we can do."

The partnership between the Max Planck Society and the University of Ottawa was announced in 2015. Joint research includes the development of very high intensity laser sources, optical methods for quantum information science for use in secure data transmission over optical fiber systems, and the fabrication of devices for use in classical and quantum photonics. The cornerstone of the partnership is to provide young researchers with international exchanges between Canada and Germany, giving them the opportunity to explore different scientific cultures early on in their professional development. 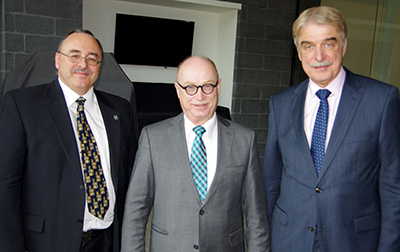 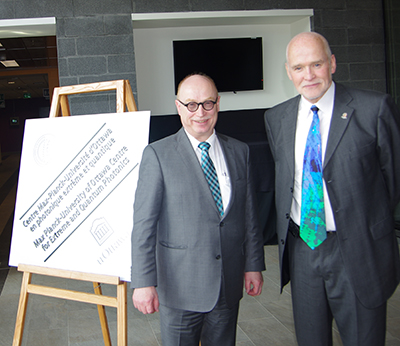 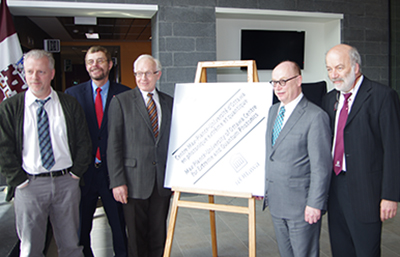