The process by which stars are formed from interstellar gas and dust is still not understood. The first step occurs when the diffuse interstellar matter is collected over distances of up to 1000 light years and transformed into the molecular phase, thus forming a giant molecular cloud (GMC). It is not known whether gravitational or thermal instabilities drive this first stage of star formation, and the role of the large-scale galactic magnetic field that is frozen into the interstellar medium is also not known.

GMC formation is a complex process involving shock compression and high Reynolds number (i.e., turbulent flow), but computational advances are currently leading to new insights via three-dimensional numerical simulations.1 On the observational side, one of the key challenges to obtain information about magnetic fields, which can be done via linear polarization measurements in the submillimeter band. Using an experiment that operates under the exceptionally dry skies at South Pole Station, we have recently exploited this technique to map the large-scale magnetic fields of GMCs. Data recently collected with our submillimeter polarimeter for antarctic remote Observations (SPARO) indicates that the GMC fields are preferentially parallel to the galactic magnetic field.2 This shows that GMC formation preserves mean magnetic field direction, providing a constraint for GMC formation theories. 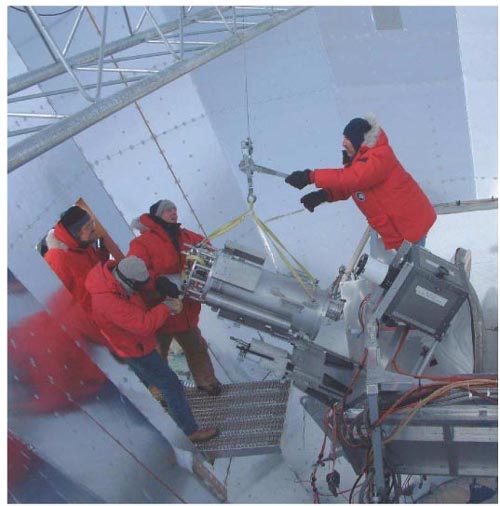 Figure 1. A crew works at the SPARO installation at South Pole in January 2003.

The technique of submillimeter polarimetry relies on the fact that interstellar dust grains are aligned by ambient magnetic fields. The thermal emission from interstellar grains has a spectrum peaking in the submillimeter band, and when the grains are aligned this radiation is polarized orthogonally to the sky-plane component of the field.3 Submillimeter polarimetry does not directly measure the field strength, but it does trace the field lines.

SPARO was built in the late 1990s by my group at Northwestern University, and is used together with a 2m submillimeter telescope at South Pole called Viper. We operate at South Pole because submillimeter light is strongly absorbed by atmospheric water vapor, and the skies over the high Antarctic plateau are the driest on Earth. However, the best atmosperic transmission is obtained during the Antarctic winter when there is no access to South Pole. Science teams must set up experiments during the Antarctic summer, and in mid-February the last of the summer crew depart, leaving a small ‘winter-over’ crew behind to run the experiments until October.

To achieve the required sensitivity, the detectors in the SPARO polarimetric camera must be cooled to 0.3K. Under laboratory conditions, experiments operating at 0.3K are routine, but achieving reliable operation during a South Pole winter-over required a new design for the camera's cryostat. Novel features included a continuously operating capillary-fed 1.5K stage. The results of SPARO's first run,4 in Austral Winter 2000, were the first astronomical results to be obtained during a South Pole winter-over using detectors cooled to below 1K. We made improvements to the camera after the 2000 run, and collected a much larger quantity of data during our second run in 2003.

During the 2003 observations, we studied the large-scale or global magnetic fields of four GMCs in the galactic disk. We determined the magnetic field direction for over 100 sight lines, spread out among the four clouds. Figure 2 shows the results for one of these. 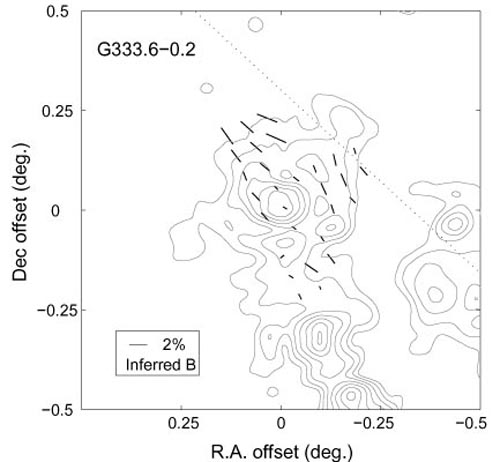 Figure 2. This map shows the SPARO magnetic field map (vectors) for the G333.6 cloud, with contours showing dust emission. G333.6 is the cloud near the center; other clouds are seen toward the south and west. The length of the vectors indicates polarization magnitude (see the key at bottom left). The galactic plane is indicated with a dotted line.

Figure 3 is a histogram of measured field directions, including results for all four clouds. The peak near the center of the histogram shows that large-scale fields in GMCs are preferentially parallel to the galactic plane. This trend had not been seen in previous submillimeter polarization studies of GMCs that were carried out using telescopes at the summit of Mauna Kea in Hawaii. We were able to discover the effect thanks to the superior atmospheric transmission at the South Pole, which allowed us to map a significant fraction of each GMC (see Figure 2) rather than just the densest and brightest sub-regions. 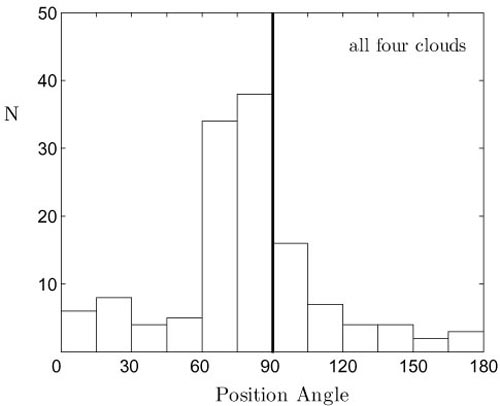 Figure 3. This histogram shows the measured magnetic field directions, including all sight-lines towards all four clouds. The position angle is given in galactic coordinates, so that the dark vertical line at 90° corresponds to magnetic field parallel to the galactic plane.

Because the large-scale galactic field is known to run preferentially parallel to the galactic plane, the correlation we discovered implies that the GMC formation process tends to preserve field direction.2 This in turn suggests that the fields are strong enough to play important roles in GMC formation. Numerical simulations that explore the effects of galactic magnetism are still overly simplified, but rapid advances are underway. Increasingly sophisticated simulations, in combination with observational constraints such as the one we have provided, may soon lead us to the correct theory for GMC formation, the first step in the development of a star.

Giles Novak is an associate professor at Northwestern University, where he has worked since 1993. In 1997, he received a Faculty Early Career Development Award from the National Science Foundation.