A fast, simple solution-based method extracts photoluminescent carbon dots from coal with up to 25% yield.

When you think of coal, you probably think of energy and steel manufacturing, of heat and electricity. You probably don't look at the inky black lumps and think of photoluminescence. And yet a Rice University team led by chemist James Tour did just that, grinding up coal and processing the material to isolate nanoscale crystalline structures that fluoresce at yellow, green, and blue wavelengths. Whether the particles are quantum dots or merely emissive carbon dots may need further investigation. One thing is certain, though--produced using coal, a substance cheaper than water, the dots promise to support a wide array of practical applications ranging from road signs and fluorescent clothing to biological markers in medical research.

Although they were discovered in the early 70s, quantum dots really began attracting interest in the mid-90s. Quantum dots consist of nanoscale structures at sizes that impose 3-D quantum confinement, i.e. trapping an electron in a very small area. This introduces some interesting optoelectronic effects. Macro-scale semiconductor materials have an intrinsic bandgap that determines the output wavelength of the device. In the case of quantum dots, the quantum confinement causes the bandgap to vary as a function of particle size. As a result, the smaller the dots, the shorter the output wavelength. This wavelength dependence is a key characteristic of quantum dots. Another important characteristic of a quantum dot versus a standard fluorescent molecule is that quantum dots do not photobleach. In contrast, typical fluorescent molecules bleach, or become inactive, after seconds or minutes of exposure. Quantum dots can keep emitting light as long as they are optically excited.

Applications for quantum dots include displays, solid-state lighting, biotech, and medical diagnostics. Early quantum dots were fabricated of semiconductor materials like cadmium selenide using a variety of methods such as lithographic patterning, self-assembly, etc. The problem with most of these approaches is they tend to be expensive and/or time-consuming. They require costly precursors and the final quantum dots are toxic.

More recently, researchers have investigated graphene oxide as a quantum dot material. Carbon dots also resist photobleaching and unlike semiconductor alternatives, graphene is nontoxic, making the dots useful for all applications. Cost remains a problem, however. Previous work in synthesizing graphene quantum dots focused on precursors such as fullerenes, graphene oxide, carbon nanotubes, and carbon fibers, all of which are significantly more expensive than coal. Synthesis methods have ranged from lithographic patterning to cleaving graphene nanoblocks and exfoliating the results into nanodots, which can be both expensive and time-consuming.

In 2012, a Rice University team led by Pulickel Ajayan developed a method for fabricating quantum dots out of carbon fiber. It was simpler and quicker than some of the other methods, but it still involved a fairly expensive starting material. When Tour and his team began investigating some of the characteristics of coal, they never expected that hidden inside they would find carbon dots that only needed to be separated out via a simple solution-based process.

Releasing the carbon dots
Coal basically consists of a collection of nanometer to sub-nanometer crystalline domains bearing defects and linked by aliphatic amorphous carbon (see figure 1). It hasn't previously been taken seriously as an optoelectronic material, however, due to the sizes of the domains. The Rice work promises to change all that. 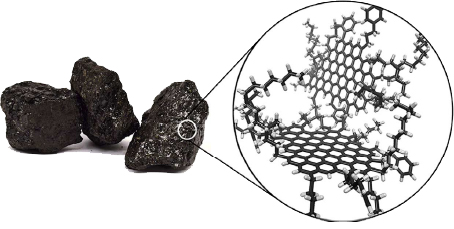 Figure 1: Coal contains crystalline nanostructures that can be extracted as carbon dots. (Courtesy of Nature Communications)

The process does not simply involve milling any old form of carbon into small pieces -- even the finest surface is not smooth enough to produce dots of this size. Carbon dots, Tour maintains, exist in the coal itself. To release them, the team ground up the coal, then sonicated the powder in concentrated sulfuric acid and nitric acid. Next, they heated it at 100° or 120° C for 1 to 2 hours. The process isolated the nanostructures and oxidized their edges. Once the oxidation step was over, the team neutralized and filtered the product. The result was a water-soluble blackish powder that consisted of nanoscale graphene dots with amorphous carbon addends on the edges. The yield is surprisingly high, with roughly 25% of the coal converted to carbon dots.

The Rice team used three different types of coal for their tests: anthracite, bituminous coal, and coke. Bituminous coal formed crystalline hexagonal carbon dots (b-CDs) 2.96 ± 0.96 nm in diameter and quite regular distributions of size and shape (see figure 2). Analysis by atomic force microscope indicates that the structure of the dots consists of two to four layers of graphene oxide. 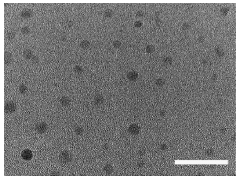 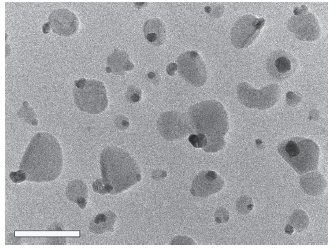 To demonstrate that the results are a function of the precursor and not just the process, the team applied the same technique to large-flake graphite. After processing, roughly 95% of the flakes remain unchanged. Because coal begins with small crystalline domains, the material can more easily undergo oxidation, leading to a higher-quality product with milder reagents. In tests, nearly all of the coal went into solution whereas graphite primarily never dissolved.

The results
To test the photoluminescence properties of the dots, the team excited them in solution with 345-nm output from an excitation lamp. The peak emission wavelengths for the a-CDs, c-CDs and b-CDs were 530, 480, and 460 nm, respectively (see figure 4). 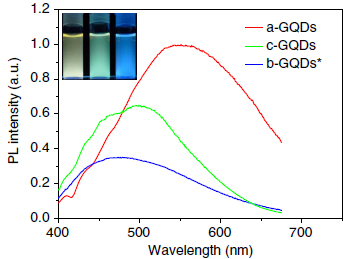 The dots showed interesting responses to solution pH. In acidic and neutral solution, they generated peak photoluminescence over an excitation waveband of 380 to 400 nm, while the peak excitation band for an alkaline solution ranged from 310 to 345 nm. The team theorizes that the alkaline solution raises the electrostatic repulsion between dots, preventing them from aggregating. The acidic/neutral solution supports an aggregated state and a shift to longer excitation wavelengths. Interestingly, for a constant pH, output wavelength does not change across the excitation waveband from 300 to 400 nm, which Tour attributes to the consistent sizes of the dots for any one type of coal.

Solution pH also affected output. Raising the pH from 7 to 10 moved the output from 500 to 460 nm, while lowering pH from 6 to 3 red-shifted the photoluminescence from 500 to 540 nm. In both instances, intensity dropped; indeed, the ideal operating pH appears to be in the 6 to 7 range. Other factors besides diameter appeared to affect output wavelengths, including edge quality and defects.

The dots demonstrate good output stability. Conventional fluorophores quench rapidly. The output of the carbon dots remains stable, even after two hours of continuous excitation. "They don't quench," says Tour. This makes them a promising alternative to organic and small molecule fluorophores like fluorescein.

The Rice method is economical, simple, and fast. Of course, there are some limitations and it's not appropriate for all applications. "These aren't the highly pure materials where you have good really mono-dispersed quantum dots -- the fluorescence is broader -- but for many applications that's not going to make a big difference anyway," says Tour, noting that better filtering could narrow the emission bandwidth. Still, for applications like safety signs and bicycle reflectors, highway markings and luminous clothing, cost is a more important factor than precise wavelength. Here, coal-sourced CDs really shine. The technology could deliver industrial-scale quantities of the materials at affordable prices, making them competitive alternatives to current technologies. "The process is simple and cheap," says Tour. "That's what's nice about it."

There was some question among reviewers as to whether the structures are actually quantum dots, but the data points that direction, Tour says. They demonstrate the characteristic size-dependent wavelength shift, for example (see figure B). To quantify the effect, the team took carbon dots they produced at 100°C and continued to heat them up to 120°C. This increased the edge oxidation, decreasing the inner diameter. "You can measure the size by TEM and you can see it go from, say, 3.5 nm to 2.5 nm and the wavelength scales exactly the way you would expect," he says. Specifically, the b-CDs with diameters of 2.96 nm generated output at 500 nm compared to 2.30-nm b-CDs, which photoluminesce at 460 nm (see figure 5). "The question is are you getting quantum confinement in that system? Every test that we have done says yes." 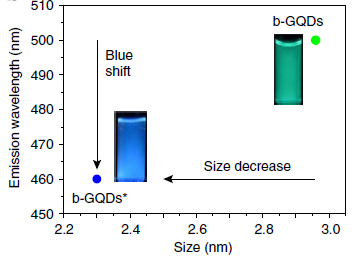 Figure 5: Shrinking the size of carbon dots by extending the oxidation introduces a blueshift in the spectral output that is consistent with quantum-dot behavior. (Courtesy of Nature Communications)

But Tour agrees that there is room for additional investigation, given that other mechanisms such as edge oxygen functionalities, or remaining conjugated domains could be responsible for the emission.

"These nanoparticles appear to be quite useful, and the question of whether or not they are quantum dots doesn't detract from the impact of the work," says Michael Strano, professor of chemical engineering at MIT, who is not involved with the research. "I have my own hypothesis as to the origin of the emission in these structures, but only further testing and refined control over size and morphology will answer these questions definitively.

The results are intriguing, but more work is needed. "Coal is an economical starting material [as low as $10 per ton] but it also contains many impurities such as heavy metals, even radioactive thorium," Strano observes. "Much work will need to be done to purify such materials, but this is not unlike many other systems in nanotechnology." Methods for controlling size and structure will also need to be developed, he notes. "There are perhaps billions of different chemical configurations for dots of different sizes. It will be interesting to learn more about their properties as they are distinctly isolated."

In the meantime, however, the work has already generated broad interest. "Long ago I enjoyed loading coal into trucks for my grandmother's coal business, and even then wondered about the structure of coal," says Ray Baughman, director of the Alan G. MacDiarmid NanoTech Institute at the University of Texas at Dallas, another independent commenter. "This elegant paper from Jim Tour's group both provides an important answer and remarkably shows that coal can be cheaply converted in high yield to wonderful graphene quantum dots. These dots are fundamentally interesting and promising for many applications."