Two NASA-funded programs will image the Sun and then an exoplanet: both at high angular resolution and both using the same mirror.
26 July 2006
David Content, Scott Antonille, Douglas Rabin, and Thomas Wallace

To discover still-unknown celestial objects and to study known objects more accurately, high angular resolution telescope mirrors that do not increase payload weights are increasingly required for telescope-based experiments conducted outside the Earth's atmosphere. Sounding rockets—suborbital rockets that carry payloads beyond Earth's atmosphere but not into orbit—are the fastest and least expensive transport devices for such missions. However, ultra-light-weight, high-precision mirrors necessary for the success of such missions are expensive and have long production schedules beyond the scope of typical sounding-rocket programs.

Two such programs require an ultra-light-weight, precision-polished 0.5m aperture telescope mirror. By developing a common design for the telescope, the expense of the mirror can be shared by two programs: PICTURE (planet imaging concept testbed using a rocket experiment) to image the Sun and SHARPI (solar high angular resolution photometric imager) to image an exoplanet (a planet that revolves around a star other than the Sun).

The first sounding-rocket mission, PICTURE, flies in 2007 during periods when the exoplanet is at its brightest, and is led by Dr. Supriya Chakrabarti of Boston University along with members from the Jet Propulsion Laboratory (JPL), NASA, and Boston Micromachines. The program is being carried out in collaboration with a second sounding-rocket program, SHARPI. The planet-imaging instrument uses a visible nulling coronagraph built by JPL1 that incorporates a MEMS (micro-electro-mechanical systems) deformable mirror array. This array provides substantial wavefront-error correction to allow the high contrast necessary for exoplanet imaging.

The researchers funded the telescope by a combination of programs involving various sounding-rocket projects, NASA light-weight mirror technology, small business research and development, and independent research and development from vendor ITT Space Systems (formerly Kodak Remote Sensing Systems). The agreed-upon telescope uses a Gregorian design (a reflecting telescope with two concave mirrors) and a high-magnification tertiary mirror (similar to a three-mirror anastigmat, a system designed to be free of astigmatism). The design produces large angular magnification with an intermediate image field stop that eliminates most of the solar heat flux affecting the mirror during the mission.

The primary mirror (see Figure 1) has a clear aperture of 50cm, full size of 55cm, and is light weighted 92% (that is, mass is reduced without significant degradation to rigidity) so that it weighs only 4.5kg. ITT Space Systems polished the primary mirror to approximately 7nm root mean square (rms) figure error. Figure 2 shows a decomposition of the residual errors at nanometer scale in terms of radially symmetric, radially asymmetric, and cell quilting (cell print-through).2 At an areal density of 20kg/m2, the mirror is nine times lighter per unit area and has better surface accuracy (that is, it has similar overall surface errors but with a correct conic constant) than the primary mirror of the Hubble Space Telescope. As required for use in the ultraviolet region, the primary mirror is a precisely polished (to 1.1nm rms microroughness) diffraction-limited mirror. 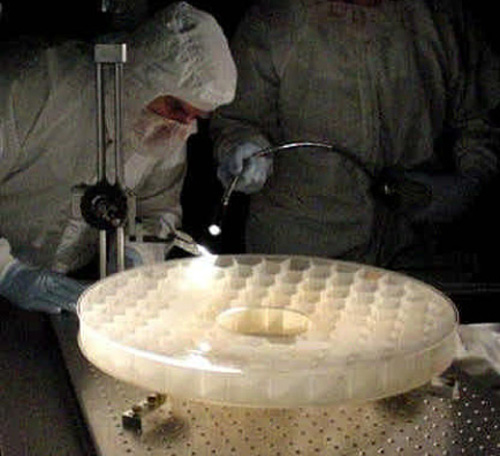 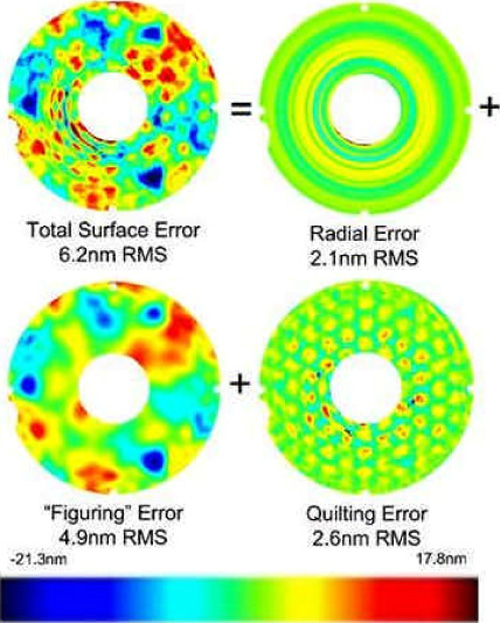 The 12cm-diameter concave secondary mirror was produced on a Small Business Innovative Research contract with SSG Precision Optronics Inc./Tinsley Laboratories. In addition, the mirror's substrate, made by SSG/Tinsley, is composed of reaction-bonded silicon carbide (SiC) and weighs less than 0.25kg. Partly because of its greater stiffness, the surface figure accuracy of the secondary mirror is 3nm rms, twice as accurate as the primary mirror. The optics are treated with visible, polarization-controlled coatings that are required for the high contrasts involved in imaging exoplanets.3 During mounting, the researchers will monitor the primary mirror's structure to minimize strains. Planned for the summer of 2006, final alignment and integration of the telescope will occur at the Goddard Space Flight Center. These mirrors are among the most precise ultra-light-weight mirrors made.

The researchers verified the vendor's figure data and predictions of figure change that the mirror is expected to experience under zero-gravity conditions during the flight. Figure 3 shows the mirror reflecting interferometric fringes from the video monitor during the test. 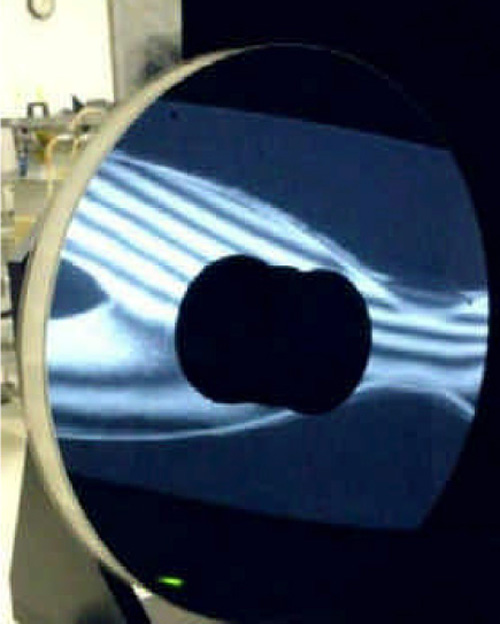 Figure 3. The image of the primary mirror (with UV-protected aluminum coating) in a horizontal figure test setup, reflecting interferometric fringes from the test off a video monitor.

The mission goal of PICTURE is to take the first direct image of the brightest exoplanet detected indirectly to date: a Jovian-size planet orbiting the star Epsilon Eridani.4,5 Upon completion of this mission, the researchers will recoat the optics with UV-protected aluminum and reintegrate the telescope with a new tertiary mirror, UV detector, and filters to accommodate the SHARPI payload. With such equipment, researchers hope to acquire the highest-resolution solar ultraviolet images ever obtained.