The Green Bank Telescope: exploring the mysteries of the universe

The National Radio Astronomy Observatory (NRAO) Robert C. Byrd Green Bank Telescope1,2 (GBT) is now the world's premier single-dish radio telescope. It has an exceptionally wide design frequency range, covering three decades from 0.1 to 100GHz. At 17 million pounds in weight, the GBT is one of the largest moving structures on land (see Figure 1). A unique feature for a telescope of such size is its offset optics: these provide an unblocked aperture and an extremely clean beam. The primary mirror features an active surface of 2004 controllable panels. The telescope is located in the National Radio Quiet Zone, a vital resource for radio astronomy encompassing about 13,000 square miles that straddle the West Virginia-Virginia border.

To observe at 100 GHz, the GBT requires pointing and tracking stabilities of better than 2 arcseconds RMS. This is comparable to the open-loop tracking performance of large optical telescopes but must be achieved without the benefit of a dome to protect the telescope from environmental effects. Mirror surfaces must be accurate and aligned to around 100μm, or one part in a million for a 100m telescope.

To deliver the current performance, we measure the temperature of various parts of the structure to better than 1°C. Combining these data with astronomical pointing measurements, we solve simultaneously for gravitational, thermal, and wind effects in the development of static pointing models. The temperature sensor system then generates additional real-time corrections to compensate for the effects of thermal gradients in the antenna. To date, we have achieved pointing accuracies of 2.7 arcseconds, meeting current requirements for science operations to 50GHz.

The GBT's active surface is adjusted in real time using the predictions of a finite element model (FEM) for antenna deformations due to gravity. This produces acceptable results up to 20GHz, but at higher frequencies the antenna has a strong gain falloff at low elevations. To correct this we use a form of phase-retrieval holography, a technique developed by Misell3 for electron microscopy. The power pattern of the antenna is measured at two different settings, first with the antenna in focus and then with it out of focus. The phase of the signal in the aperture, recovered by numerical processing, translates directly to the required surface adjustments. Using measurements of astronomical sources at various elevations, we have developed a lookup table for residual large-scale gravitational deformations not predicted by the FEM. This has flattened the gain-elevation curve, and provides an overall wavefront error of around 350μm. 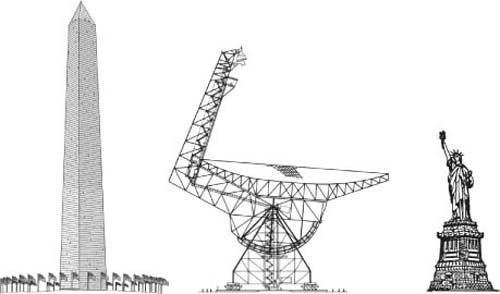 Figure 1. The GBT, showing its offset optics and size in relation to some well-known U.S. landmarks.

The GBT is contributing to scientific progress in many fields of astronomy. For example, the study of pulsars in globular clusters has been revolutionized by the GBT discovery of over 50 new cluster pulsars,4 many of which are truly exotic and rare objects. These discoveries were enabled by the GBT's excellent sensitivity at 2GHz, its ability to observe southern bulge globulars for up to 8 hours at a time, and the powerful signal-processing capabilities developed for the facility. The biggest surprise from among these pulsars were 30 in the cluster Terzan 5 with rotation periods of a few milliseconds. Six of these have highly eccentric orbits, and at least two appear to be massive, exceeding 1.7 M⊙ (solar masses). Two other millisecond pulsars are in strange orbits with what are probably main sequence stars: this is likely the result of stellar interactions. One of these, PSR J1748-2446ad, is the fastest pulsar yet discovered (716Hz). The rapid rotation of these pulsars significantly constrains the equation of state of matter at nuclear densities.

Other GMT efforts have a bearing on the standard model of cosmology, which consists of a flat universe composed of baryons, dark matter, and dark energy. The model is set largely by recent studies of the cosmic microwave background (CMB). Dark energy dominates the mass budget of the universe, but its nature is almost completely unknown. The most valuable counterpart to CMB studies that constrain dark energy's equation-of-state would be an independent determination of the Hubble constant (H0) to better than 3%. However, optical measurements of H0 suffer from systematic errors arising from indirect distance estimates obtained with a set of overlapping methods known collectively as the ‘cosmic distance ladder.’ By observing emissions from water megamasers orbiting the central black holes of active galactic nuclei,5 the GBT—with follow-up very-large baseline interferometry observations—can make direct, and independent, geometric distance measurements to these objects. Programs to perform these observations are underway.

Now in routine operation at frequencies up to 50GHz, the GBT has demonstrated its potential as the world's most advanced single-dish radio telescope. Continued telescope improvements will allow us to push the frequency limit to 100GHz. Detector developments—in particular arrays for continuum and spectral line observations—will provide order-of-magnitude increases in capability, keeping the GBT on the cutting edge of astronomy for years to come.

The NRAO is operated for the National Science Foundation (NSF) by Associated Universities, Inc. (AUI), under a cooperative agreement.