The viewing angle of a 3D display based on integral imaging can be increased by adding a flat holographic array that acts as a virtual lens.
20 June 2006
Hideya Takahashi, Hiromitsu Fujinami, Kenji Yamada

Various methods have been studied to create three-dimensional (3D) image display systems.1 Among these is integral imaging (InIm, II), also known as integral photography (IP). This technique, first proposed by Lippman in 1908,2 uses a 2D array of micro-lenses (a fly's eye lens) to capture and display 3D information.

The many advantages of integral imaging make this one of the most attractive ways to create autostereoscopic 3D displays.3,4 Integral imaging provides continuous viewpoints within the viewing angle, and does not require special glasses. In addition, it provides full parallax and can display moving images in real time. However, integral imaging still has problems with limited resolution, image depth, and viewing angle. Among these, the narrow viewing angle is the main disadvantage.

Several methods have been proposed to increase the viewing angle of integral imaging displays. One is to use multiple display devices.5 Another is to use a curved lens array and a curved screen.6,7 However, the necessary physical configurations make these systems difficult to implement.

Figure 1 shows the configuration of the proposed 3D display system, which consists of a projector and a flat HOE lens array. Each elemental image is projected as a parallel beam onto the corresponding HOE lens element. Together, they create an image with a wider viewing angle than that of the original projected image. 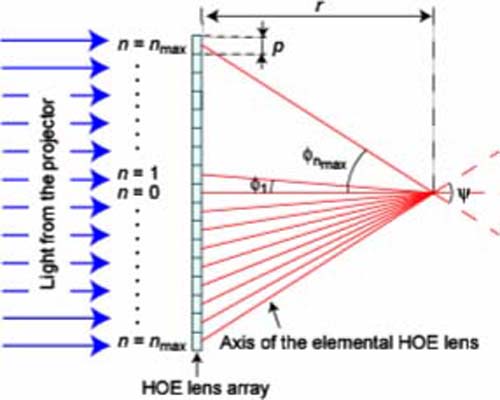 With this arrangement, the fact that the beams from the projector are parallel means that the projected area exactly matches the area of the HOE lens array. Precautions to avoid flipped images are not required, and each elemental image has the same resolution. The flat HOE lens array provides a simple physical configuration that at the same time gives a wide viewing angle.

To demonstrate the effectiveness of the proposed method, we have constructed an experimental system with an HOE lens array consisting of 17 × 13 lens elements. The size of each of these is 4.4 × 4.4mm, and the focal length of the central element is 18.3mm. The radius of curvature of the virtual curved lens is 50mm (Figure 2), so the 3D image appears 50mm in front of the HOE lens array. 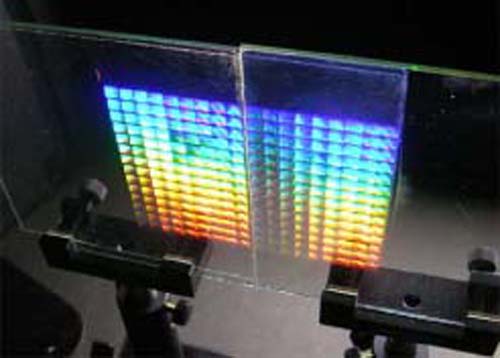 Figure 2. HOE virtual lens array with 17 by 13 lens elements, each measuring 4.4 × 4.4mm. The radius of curvature of the resulting virtual lens is 50mm.

Our proposed display, in contrast, has a theoretical viewing angle of 37°, and an experimental viewing angle of about 35°, on each side of the axis. It thus provides around five times the viewing angle of the conventional arrangement, while having a configuration and no problems with flipped images. In addition, the curvature of the virtual lens formed by the HOE array can be in one or two dimensions. Using an array that creates a 2D curved lens array can provide a wide viewing angle in both the horizontal and vertical directions.