An optically pumped cesium-vapor laser with a slope efficiency of 81% has been demonstrated that can be scaled to high power for use in missile defense and technological applications.
28 April 2006
Boris Zhdanov, Thomas Ehrenreich, and Randall Knize

Although efforts to develop high-power laser systems for military and civilian applications have yielded some notable results, they all have shortcomings. Chemical lasers, which form the basis of the most successful systems, suffer from the use of hazardous chemicals and from a limited magazine (number of shots). Systems that use solid-state, fiber, or semiconductor lasers, on the other hand, have not achieved the power needed for many applications.

Optically-pumped alkali lasers, including cesium lasers, have a number of desirable features compared to chemical lasers. In addition to not using large quantities of hazardous materials, they can be constructed in closed cells, thus eliminating the need for vacuum pumping and chemical discharge. They also have short wavelengths (894nm for Cs laser,1 795nm for Rb laser2) compared to the 1315nm chemical oxygen iodine laser, for example, making it possible to focus the laser beam on a tighter area of the target.

Alkali lasers also have many advantages compared to solid-state or fiber lasers. The quantum efficiency is higher (95.3% for Cs compared to 76% for a 1.06μm Nd:YAG laser), which is very important both for increasing the overall laser efficiency and for reducing heating problems. Thermal problems can be further reduced by flowing the gas gain medium to remove heat. The gas gain medium also has excellent optical quality, allowing the generation of a high-quality beam with diffraction-limited divergence.

More generally, the alkali number density and buffer gas composition of alkali lasers can be easily changed to optimize performance. Also, the use of high-power narrowband diode-laser arrays for pumping alkali vapors holds the promise of high overall wall-plug efficiency.3

The first proposed optical laser was based on an alkali vapor design (potassium, in 1958).4 Over the last several years, optically pumped alkali-vapor lasers have demonstrated high efficiency in generating a high-quality laser beam in the near IR. Recently, we demonstrated efficient Cs laser operation5 at a wavelength of 894nm. The overall optical efficiency was 63% at 0.57W pump power, and the slope efficiency—change of output power with input pump power—was 81%, close to the maximum possible limit calculated to be 86% (Figure 1). We used a three-level pump to create the population inversion on the D1 transition (6P1/2to 6S1/2) in the Cs atomic vapor. A narrowband tunable Ti:Sapphire laser operating at 852nm pumped the Cs atoms to the 6P3/2state (D2 line), which was then rapidly quenched to the 6P1/2state by an ethane buffer gas. This created a population inversion between the 6P1/2and 6S1/2states and lasing at 894nm. 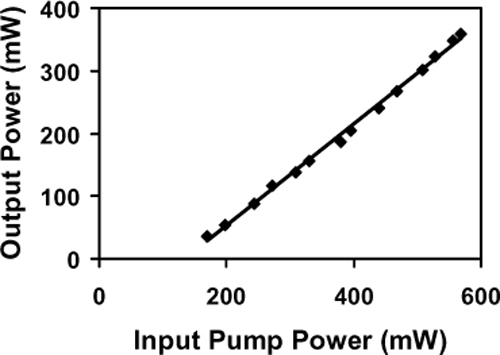 Figure 1. Cesium laser output power dependence on the pump power is shown: the slope efficiency is 81%.

The Cs laser design used a 2cm-long glass cell filled with metallic cesium and ethane buffer gas, and placed inside a temperature-controlled oven. The oven and cell were positioned in the middle of a confocal laser cavity that was longitudinally-pumped through the input cavity mirror. We experimentally determined the optimal laser operating conditions that could provide the maximum lasing efficiency (cell temperature, pump beam size, reflectivity of the output coupler).

In conclusion, we have demonstrated an optically pumped Cs vapor laser with a slope efficiency close to its maximum possible limit of 86%. Very high gain and low losses in the Cs vapor laser medium allowed us to obtain 81% slope efficiency and 63% overall optical efficiency with 0.57W pump power. Using efficient high-power narrowband diode-laser arrays for pumping Cs and other alkali vapors should allow these lasers to be scaled to high power.

We acknowledge support of the Air Force Office of Scientific Research, the Joint Technology Office for High Energy Lasers, and the National Science Foundation.