Charles Hard Townes, a professor emeritus of physics at the University of California, Berkeley, who shared the 1964 Nobel Prize in Physics for invention of the laser and subsequently pioneered the use of lasers in astronomy, died on 27 January. He was 99.

Townes was 35 in the spring of 1951 when, seated on a park bench among blooming azaleas in Washington, DC, he was struck by the solution to a longstanding problem, how to create a pure beam of short-wavelength, high-frequency light.

That revelation -- not much different from a religious revelation, Townes believed -- eventually led to the first laser, a now ubiquitous device common in medicine, telecommunication, entertainment and science. Then a professor at Columbia University and a consultant for Bell Telephone Laboratories, Townes had transitioned from working on radar during World War II to using shorter wavelengths of light to study the energy states of molecules, a field called spectroscopy. The problem bedeviling him was how to create an intense beam of microwave energy to use as a probe.

Townes shared the 1964 Nobel Prize in Physics with Aleksandr M. Prokhorov and Nicolai G. Basov, who independently came up with the idea for a maser. 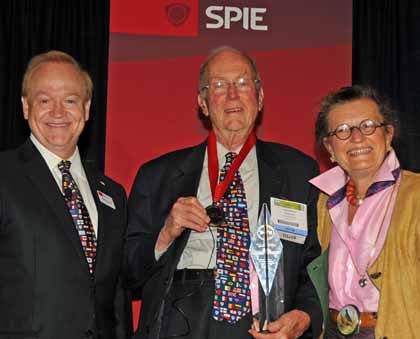