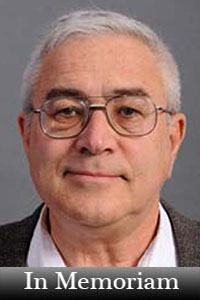 He joined the UCF faculty in 1994 and made outstanding contributions in research and education in optics and photonics and had been a great asset to the College for more than two decades.

Zel'dovich is well known for his scientific contributions, especially in the nonlinear optics community where he was known as the father of phase conjugation and giant nonlinearities in liquid crystals. He is also known for his multiple works on optical speckle waves and beam propagation. He published two well-known books, chapters in books, and many journal papers. He was recognized at the national and international levels as Fellow of the Optical Society (OSA), member of the USSR (later Russian) Academy of Sciences, and recipient of the prestigious Max Born Award in Physical Optics from the Optical Society (OSA) and the USSR State Prize. He served on numerous editorial boards and in leadership roles in various professional societies.

Zel'dovich had 35 relatives with PhD degrees in physics, and his father, the famous Yakov Zel'dovich of black hole and H-bomb fame, had people like Lev Landau (of Landau and Lifshitz fame) over for dinner. In this environment, Zel'dovich learned physics as one of his first languages.

"He had a very different way of thinking about physics than most of us who learned it in a formal school environment," says SPIE Fellow Eric Van Stryland of CREOL. "It would sometimes take us quite a while to figure out what he was talking about, but when we finally did, he brought new insights to complex and sophisticated problems."

Zel'dovich's colleagues at CREOL note his love for teaching, not just at the highest levels of optics but also to small children. He volunteered to teach mathematics to the children and grandchildren of CREOL faculty. He conducted self-funded Saturday morning electronics workshops for middle-school students, suppling them with electronic parts and devices. His depth of understanding of math and physics made it easier for him to communicate abstract subjects not only to his colleagues but also to young children.

Zel'dovich had a keen understanding of applications of physics and was cofounder of BEAM, Inc., one of CREOL's more successful startup companies, which developed liquid crystal-based devices. He provided complete, rigorous mathematical analyses for another startup, OptiGrate, which developed holographic elements.

"His friendly manner, deep understanding of physics, and booming cheerfulness added an important dimension to our college," says SPIE Fellow MJ Soileau of CREOL. "His thinking in all matters seemed informed by his keen sense of science."

Soileau tells of the time he was driving Zel'dovich to UCF and Zel'dovich noted what looked like heavier traffic going the other way. He posed a question about this observation -- were there more cars going the opposite direction or are we observing a sort of Doppler effect?

Zel'dovich was known for his sense of humor and many of his jokes involved physics, e.g., "which has the lowest energy, a steak or a hamburger? Answer: a hamburger, because it is the ground state."