Optical communication systems have advantages over RF systems that include a wider bandwidth, larger capacity, lower power consumption, more compact equipment, greater security against eavesdropping, and immunity from interference.1 Because of this they are expected to revolutionize space system architectures.2

Although there have been only a few in-orbit demonstrations so far,3–5 experiments to verify the advantages of in-orbit optical communications should continue, and full-scale demonstrations would follow. It is therefore important to investigate the appropriate characteristics of such communication systems and to identify which systems are best suited for various configurations of space networks.

One optical system we investigated operates at a wavelength of 0.8μm using intensity modulation (IM) and direct detection (DD) with an avalanche photodiode based on SILEX (Semiconductor Intersatellite Laser Experiment) technology. SILEX is the first in-orbit inter-satellite laser communication link, and was demonstrated in November 2001.4 The other system uses 1.5μ m-wavelength optical preamplifiers with on-off keying. Erbium-doped fiber amplifiers (EDFAs) are used as a booster amplifier in the transmitter and as a low--noise preamplifier in the receiver. Transmitter and receiver antenna diameters of 10cm and 1m, respectively, are assumed for both systems.

The RF system parameters we studied are drawn from GEOTAIL, the spacecraft launched in 1992 to explore the geomagnetic tail up to 1,000,000km from the Earth. It operates in the x-band frequency of 8.47GHz, with transmitting and receiving antenna diameters of 18cm and 64m, respectively.

The maximum achievable data rates for the optical and RF communication systems at a bit error ratio of 10-6 are plotted versus distance (R) in Figure 1. The data rates for the IM-DD and the EDFA systems are higher than for the RF systems at distances less than 106km, but are proportional to R-4 beyond that. The crossover in communication performance occurs at around 107 km. This is because the data rate of the RF signal is always proportional to R-2, in contrast to the dependence found in the optical systems. The RF system is therefore preferable for the Mars-to-Earth communication link distance of around 108 km. 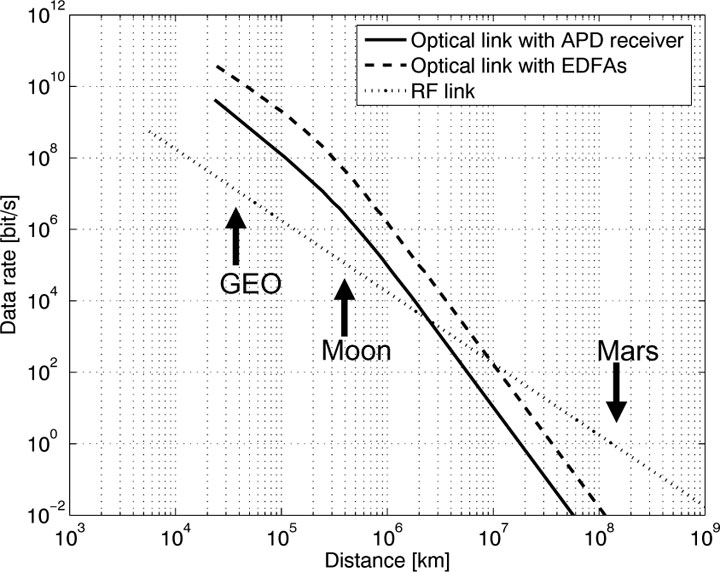 
It may be necessary to abandon the use of optical systems over longer distances, unless new technologies, such as special modulation and coding techniques and antenna configurations,7 are developed. Promising technologies are emerging. Researchers have recently developed a technique that goes beyond the classically-understood limits of a communication channel defined by Shannon's law, using a so-called quantum circuit in the receiver.8 Further progress in quantum physics may open other possibilities for long-distance optical communication.